We Can Scientifically Increase Your Productivity 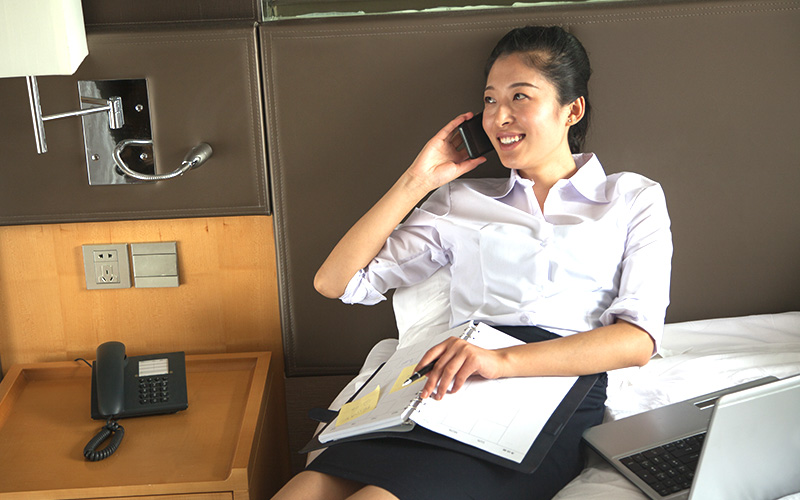 Time is money. The thin line between success and failure, to getting the deal and missing it are in those moments when our productivity was limited. The winners are the ones who have learned to squeeze our every drop of productivity from their workday.

We’re on the cutting edge here at Brilliant. When it comes to transportation, being a chauffeur service is a byproduct of our genius. We’re in the business of providing brilliant solutions for our clients. To meeting their needs and making their lives better, and we drive you places while we do it.

Now, we’re helping you to literally be more productive; and we’re basing it on science.

5 Ways to Be More Productive 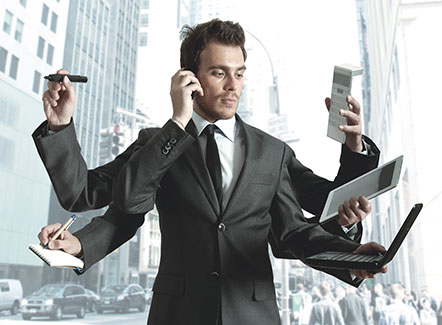 You can’t efficiently work if you can’t efficiently communicate. Being disconnected or out of reach for even a few minutes every day can significantly hamper your productivity, as well as those that rely on their connection to you. Being without access to e-mail, web browser, and files in the cloud can either halt your work entirely or severely handicap your performance.

The secret to maximizing your productivity throughout the day may lie in simply staying connected when you would normally have to unplug. This means in your transit time, you need to take your office with you.

In our luxury vans we provide all the connectivity of the office with satellite TV, high-speed internet, power outlets to charge electronics, desks and comfortable seating. You can literally walk out of the high-rise, into your mobile office and continue your work while you travel.

Along the same lines as #1, maximizing productivity means minimizing downtime. You’ve got to stay ahead of the other guy, and he’ll take advantage of your downtime to make up lost ground and get further ahead.

If you’re a commuter, you lose 8 working days a year from simple traffic congestion. In New York City, the average commute time for top executives is over an hour and a half. That’s a lot of downtime if you’re productivity goes out the window in the car, especially if you’re driving.

Listening to self-improvement audio books while you drive might feel productive, but if your competition is working during that hour, you’re still losing ground. Working while you travel is a great way to reclaim that lost time and focus it into crushing the competition, rather than watching the buildings go by.

Other ways to reclaim your lost time:

Don’t let Troxler Fading rob you of your productivity. Sometimes the bulldog, “sticking with a task until it’s done “works in reverse due to the scientific makeup of the human brain.

Troxler Fading is a mental phenomenon where continual attention to a stationary object in one’s peripheral vision can lead to that object completely disappearing from view. It’s just something natural that happens. When your brain concentrates on one thing too long, the brain itself starts diminishing it’s importance until it becomes nearly impossible to maintain focus.

An enlightening scientific study was done on a group of 84 participants. They were divided into groups and given the same 50-minute tasks. Invariably, performance decreased over time. However, in the second group, which were allowed 2 small breaks during the session to concentrate on something besides the main task, there was no decrease in performance.

So don’t be stubborn and force yourself to focus on the task at hand if Troxler Fading of the brain is taking over. Take a break! Close the laptop, turn on some relaxing music and allow your mind to wonder for a little while. Turn on the TV and catch up on the football scores. Tell your chauffeur (did I mention you were in a Brilliant van?) to stop at the snow cone stand.

If taking a break doesn’t help you recharge and refocus, you need to take a nap.

Now we’re really stepping on the toes of the workaholic. “Sleeping on the job” is a fireable offense! “We don’t pay people good money to saw logs in dreamland!”

Some companies are starting to do just that. As a matter of fact, the most successful companies are leading the way. Proctor & Gamble, and Google are two mega-corporations who have installed sleeping pods in their offices.

Robert Stickgold, of Harvard University, performed a study on college students who were not sleep deprived. The students took part in grueling sessions where they had to stare at a video screen filled with horizontal lines. Periodically, small flashing lines appeared in the corner of the screen. The students had to say whether the bars were stacked horizontally or vertically.

Stickgold measured the time it took to answer correctly 80% of the time. Unsurprisingly, the cognitive ability of the students to quickly answer correctly faded and performance worsened throughout the day. They found that students who took a 60 minute nap between tests returned to their peak performance levels.

The conclusion is simple. If you’re brain is functioning at 60% from 1pm to 5pm, would it be better to keep going rather than taking an hour nap and working at 100% from 2-5pm?

Don’t worry, the windows have retractable shades that make the cabin dark and relaxing. Roll up the divider between you and the chauffeur, recline your lush captain seat and allow your mind to drift away into… (don’t you just hate the sound of your alarm clock?) 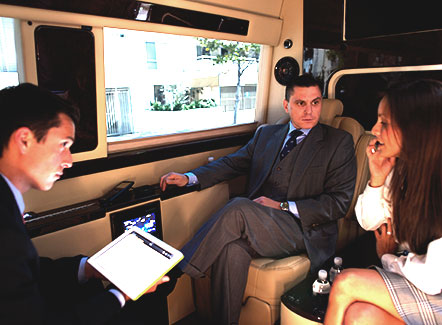 This isn’t so much scientific as it is common sense. Sometimes killing two birds with one stone just makes sense.

Now, if you’re working on a task that requires concentration, such as proofing a contract or approving a proposal, multi-tasking will absolutely kill your productivity. Put away the distractions and concentrate on the task at hand, you’ll get done faster and with better accuracy.

However, there’s countless opportunities to do more than one thing at once, stacking your productivity. One of them is transportation. If you find yourself needing to get from place A to place B, but you also need to have an important meeting, there’s nothing better than doing it a the same time.

Have your business meeting in a Brilliant van!

Grab your clients, grab your coworkers, jump into a Brilliant van and experience the same productivity!.